Questions answered by this recipe

Can I have a Table Of Contents that works together with the SectionEdit recipe?

With a single markup this recipe adds a simple or numbered table of contents to the current page.
The TOC contains the headings of the page and its (:include:)d pages.
When JavaScript is enabled the TOC can be toggled from open to closed.

Download slimtoc.zipΔ and unzip it.
The archive contains two files:

slimtoc.php
Script file contains markup and functions.
Move or copy it to your cookbook directory
slimtoc.css
Stylesheet for the TOC.
Create a slimtoc subdirectory in your pub/ folder and move or copy the file into that folder.

Hint for WikiFarms: The script tries to find the stylesheet in the local pub/slimtoc/ folder; if that fails it will look for it in the farm's pub/slimtoc/ directory ($FarmD/pub/slimtoc/). If the slimtoc.css can't be found it will write the default styles into the HTML <header>.

Add the following line to your local/config.php:

So please install those recipes too.

To create a simple table of contents just put a

directive on the page. 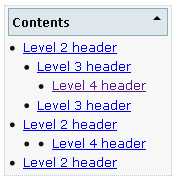 TOC will include all headings down to level $TocLevelMax (default=4, meaning !!!!, configurable)
The headings with the highest level won't be indented even if the highest present heading has only !!two exclamation marks. Headings from lower levels will be indented appropriately.
The script compensates <ul> / indents for missing levels.

To create a numbered table of contents use the

directive - toc with a # in front. 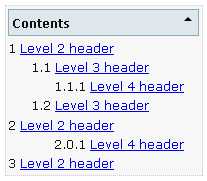 Numbers will be applied to all headings down to level $TocLevelMax (default=4, meaning !!!!, configurable)
The headings with the highest level will receive Number 1, 2 etc. even if the highest present heading has only !!two exclamation marks. Headings from the next lower level get the 1.1, 1.2, 2.1 etc. etc.
The script compensates for missing levels.

These can be set as usual in local/config.php (before including the script):

If you want to change the styling - edit slimtoc.css or override the styles within your own custom CSS in pub/css/local.css.

Hint: Don't search for graphics producing the triangles in the TOC's header - they are created via border-style and <span>s.

The recipe requires cookbook SignalWhenMarkup otherwise the numbered TOC can't calculate its numbers correctly when disturbed by (:toc:)s in (:markup:).
And it requires cookbook MarkupToUnstyled to retrieve the - properly unformatted - text of the headings for the TOC.

Enhance the (:toc:) markup with options for

If the recipe has multiple releases, then release notes can be placed here. Note that it's often easier for people to work with "release dates" instead of "version numbers".

Why do you check ($currlevel > $lastlevel) near line 300 in slimtoc.php? The script seems to work just fine without the entire block. The way it is now, if someone has, say, a !!header and then a !!!!header, you get something like this:

This seems counterintuitive, but maybe I am missing some other need for this code...

Guess it's because I don't like <dl>'s. If the checking code is omitted pmwiki mixes <dl>'s into the TOC's <ul>'s. And then you get things like this:

User notes +4 -1: If you use, used or reviewed this recipe, you can add your name. These statistics appear in the Cookbook listings and will help newcomers browsing through the wiki.